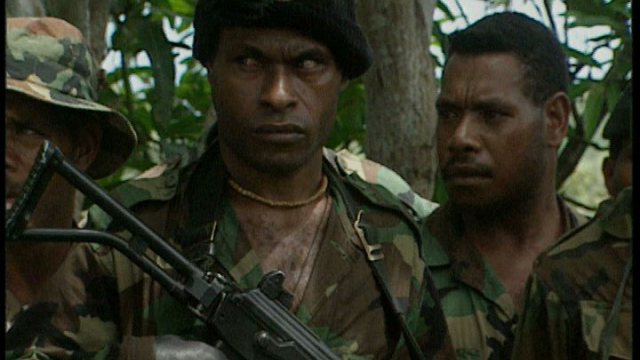 A report following the dramatic events of the Sandline affair, which resulted in the resignation of Papua New Guinea's Prime Minister, Sir Julius Chan.

This report offers a dramatic overview of the events which triggered Papua New Guinea's 1997 constitutional crisis. Jerry Singirok, the commander of Papua New Guinea's Defence Force, was sacked for calling the government out for corruption and for spending over $40m on mercerises for the war in Bougainville. Troops loyal to Singirok revolted and seized control of the main military barracks in the country, creating a huge rift between the government and the army. Meanwhile, protests erupted in the country's capital Port Mosebey, with civilians demanding Prime Minister Julius Chan's resignation. After MPs voted to keep Chan as Prime Minister, the army joined the protesters in storming the parliament building. Eventually Chan back down and resigned. Filming the chaos first hand, and following a pilot in the military, ABC Australia captures the turmoil that changed the fate of Papua New Guinea, and asks whether Singirok and the army's actions defended or damaged democracy in the country. Produced by ABC Australia
FULL SYNOPSIS
TRANSCRIPT