A group of young Chinese adoptees return to their country of birth. They have not been back since their adoption. What will they make of the change? 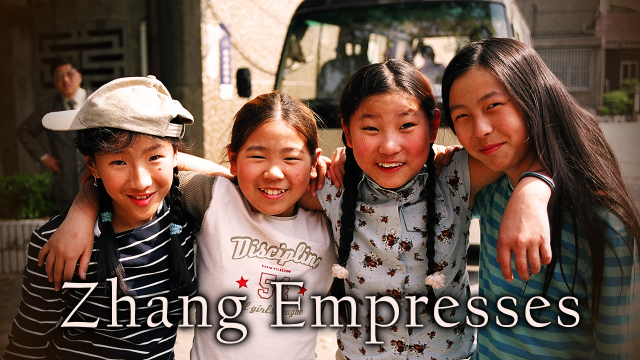 Growing up surrounded by blond, blue-eyed children in Sweden, Chinese adoptees Alice, Mimmi, Nanna and Linnea always felt different. The girls were adopted on the same day from the same orphanage but - having moved abroad as babies - they don't speak Mandarin and have no concept of their native country. Now ten years old, they are returning to China for the first time. What will they make of their homeland? A moving look at identity.

Alice sobs into her mother's arms. Returning to her former orphanage was meant to be the climax of her visit to China. The staff and orphans have showered her with attention, given her presents and taken her to a fancy restaurant. But surrounded by Chinese food she doesn't like, Alice looks utterly miserable. "The orphans think we are spoiled, not tasting this fantastic food", explains fellow adoptee, Nanna. "Think about it. Maybe they never, ever have food like this and we're sitting here not eating". Alice, Mimmi, Nanna and Linnea have always shared a special bond. "Even though we live far from each other in Sweden, our parents made us meet every year", explains Nanna. "Now, we are going back to the place where we come from and we have decided to go there together". The first thing that hits them about Shanghai is the pollution. "It smells a lot from all the cars", complains Mimmi. "They drive like nuts!" The girls are disgusted by Chinese toilets and baffled by babies' trousers, which have slits cut in the seat. "They're naked. You can see their whole behind!" giggles Mimmi. "Maybe there are so many children here, they don't have time to change diapers", guesses Nanna. Initially, the girls are pleased they fit in. "What is really cool is that everybody here looks just like me", states Mimmi. "I'm not the only one with sloping eyes and black hair". But as passers by hear them speaking Swedish, they become objects of curiosity. "It feels like we are celebrities", giggles Mimmi. "Everybody gathers around us". After a few days in Shanghai, they travel to Zhangjiagiang where their old orphanage is situated. "I just hope we're welcome", confides Nanna. They've had no response to their letter and are worried they'll be turned away. But as soon as they arrive, staff bend over backwards to accommodate them. The girls are touched to see their pictures in photo albums. "We really didn't think those photos that we sent from Sweden should be so properly put in books", confides Mimmi. Although the girls are happy in Sweden, they're haunted by the knowledge they were abandoned by their natural parents. "No one understands. I really feel like there's a lump in my stomach because I know nothing about them", confides Alice. Mimmi agrees; "If I start to think about it, it feels like the whole world is going under for me". Visiting the orphanage seems to cause these feelings to resurface. The principle introduces the girls to other children. Many of the children are handicapped but one girl with sad eyes stands out. "She is about our age and the problem is that no one wants to adopt big girls", says Alice. "I would like to adopt her!" retorts Mimmi. "But the problem is teaching her Swedish now that she already speaks Mandarin..." On the way back, everyone is subdued. "We were really lucky to be adopted to Sweden", states Alice quietly. Tomorrow, they will return to Sweden. But first, they have something important to do. They're getting stickers made of the four of them together. As Alice explains, after taking this trip together; "we feel even more like close friends".
FULL SYNOPSIS
TRANSCRIPT

After more than ten years as a free lance journalist, its easy to get a bit laid back when it comes to ideas of what you want to do and what you really go for. But when  at a November dinner with friends  I heard about the journey that Alice, Nanna, Mimmi and Linnéa were planning with their families, I felt it immediately in my stomach; that feeling that you need to get hooked. I wanted to go with them. Then a long process started, talking to Swedish Television and some other companies. Although I had been working both on radio and TV during my years as a journalist, it getting a commission was a hard job. This was my first documentary for TV. Why should they put money in me? But almost everybody I talked to said they would love to see this documentary..! and that was the thing that finally made the project come true. (And the fact that we made it almost for nothing). Questions about identity, origin and the feeling of not knowing the place were you once belonged, that is something we all can relate to, adopted or not. It turned out to be a real adventure. Neither the girls, nor their parents, knew how they would react when they got to China. The photographer, Niklas Forshell, and I, we just hung on. Took the days as they turned out, followed the girls as closely we could. We tried to interfere as little as possible. And this was very important to us, we thought that this journey was so important to the girls, that the fact that a camera followed them shouldnt be a problem. So, you could really call this a true documentary. When we were in Shanghai a Chinese TV team wanted to film the girls, but the parents said no. Out of the same reason  the first trip back to their native country and their origin was far too fragile and important than being able to be on Chinese TV. Then it was this question whether we were welcome or not to the orphanage. The girls said to themselves before that they probably were not welcome to visit. They had written letters to the orphanage directory, but hadnt got an answer. Anyway, the families went the long way from Shanghai, eight hours to the city of Zhangjiagiang were the orphanage is situated. Still, today, two years later, I get goose-pimples, when I think of that day. The feeling of being lost ,daughters coming back, getting presents, and also the feeling of being known by name and see photos of themselves on the other side of the world. But also questioning what their life would be like I they hadnt been adopted.
Its hard things to deal with when you are eleven years old, sitting next to each other at a restaurant, not being able to speak with the kids that maybe remember you and  possibly  envy your opportunities and your new life. My favourite part of the film, that is the sequence when the girls leave the orphanage. They are sitting in the bus, their hair is streaming in the wind from the open windows, and you can feel  as a spectator  the infinite sense of freedom. You can go wherever you want. You can do whatever you want with your life. And your life could have been so much different.