For over 3,600 years, the ancient community of Samaritans have only intermarried. Today they number only a few hundred and inbreeding has caused serious problems. On the brink of extinction, two lucky me are allowed to marry foreigners. 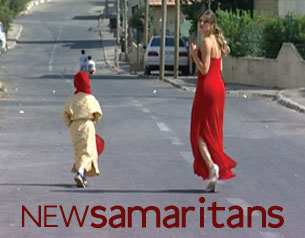 PREVIOUS BROADCASTS include ARTE For over 3,600 years, the ancient community of Samaritans have only intermarried. Today they number only a few hundred and inbreeding has caused serious problems. On the brink of extinction, their leaders take the unprecedented step of allowing two lucky men to marry foreigners. We follow them as they set off to faraway lands in search of brides. How will their new wives adapt to life in the Samaritan community?

Surrounded by old men chanting prayers and children dressed in traditional robes, Shura looks completely out of place. She smoothes down her scarlet dress and looks around the room at her new family. A few months ago, Shura was signed up by a matchmaking agency in Ukraine. Now, she has just married into the Samaritan's First Family. "What I did should have happened a long time ago", states Shura's husband, Yair. "I have two brothers who are mute, two others died and two of my uncles are also mute." Yair repeatedly asked the High Priest for permission to marry a foreigner. "But every time, the answer was 'No. You must marry a Samaritan.'" Finally, he persuaded them to overturn the centuries old edict and; "bring in a new era so that the Samaritan nation becomes stronger and bears good, healthy children". Then, he flew to Ukraine to find a wife. "When I saw pictures of Israel in the magazines, it looked so nice. I dreamed of moving there", recalls Shura. But moving to the Samaritan community in Israel was a real culture shock. "All those soldiers. It looked just like a war zone." The first few months were the hardest. "There are lots of times when I don't think I will be able to make it", she confides. "I am alone here. I don't know anything about their bible and I don't even speak the language". With her husband's support, Shura manages to last the first six months. But Yair is nervous about what will happen after she returns home. "I'm afraid that after Shura sees her friends and parents, she'll say it's better to live there and not here", he confides. "I can't sleep at night thinking about it". As the wife of the High Priest's grandson, Shura is in a unique position. As Yair explains; "She belongs to the first family of the nation". Everything is riding on their marriage being a success. Others are worried that Yair's marriage will set a dangerous precedent. "When we adopt foreign women into our nation, it makes me afraid for the future", states one priest. "I'm afraid we won't be able to control them." He worries that diluting the blood will invariably lead to a dilution of their unique traditions and result in "chaos". Sure enough, other men start looking outside their community for wives. "I had the chance to be with a Samaritan girl but I couldn't find the girl of my dreams among them", states Ranjaiy, He's fallen in love with a Russian woman called Lena and wants to marry her. However, unlike Yair, he would consider leaving the Samaritans to be with her. Fortunately, for now, Lena seems happy to become a new Samaritan. As she explains; "Being a member of such a very small group is an honour".
Director:Alexander Shabataev, Sergey Grankin & Efim Kuchuk
FULL SYNOPSIS
TRANSCRIPT

The film was created by three directors, who work together in Media Most Israel LTD, the company products the news programs for Russian TV international Channel, that translated from New-York. They were born in Former Soviet Union and repatriated in 90-th to Israel. Alexander Shabatayev is a cameraman, Sergey Grankin is a journalist and Haim Kuchuk is an editor. All three together create the high-grade film crew.

Finding the deep, interesting theme for the documentary film is the biggest happiness on the earth. We were just lucky Three and a half years ago, during our trip on Mount Gerizim, we met the High Priest of the Samaritans Shalom Ben-Abraham and he told us about todays life of a community. He told us about the most ancient people in the world. They call both Arabs and Jews "brothers". We thought: Could be that their way of life and of thinking is the answer to the eternal question - how to stop the bloodshed? He told us, that the nation is on the brink of extinction and about his decision to break one of their fundamental commandments, which strictly prohibited the intermarriage with aliens. And we decided to create the love story of two couple, that found true love in the faraway lands.