In a few days, charismatic teenager Rhaissa, a nomadic Tuareg from Niger, will marry a man she's never met. This warm, intimate documentary follows Rhaissa as she enjoys her last few days of girlhood. 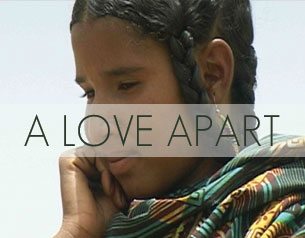 In a few days, charismatic teenager Rhaissa, a nomadic Tuareg from Niger, will marry a man she's never met. After the wedding, everything will change. This warm, intimate documentary follows Rhaissa as she enjoys her last few days of girlhood and navigates the long marriage ceremony. By engraining herself in the Tuareg community, filmmaker Bettina Hansen discretely captures their sense of values and perspective on love. The result is a unique and beautifully-crafted film.

Amidst the barren landscape of the Niger desert, two teenage girls giggle over prospective suitors. "Hopefully, the man you're marrying has pride" says Fatimata. "But if he doesn't, he should be handsome!" At this moment, with the goats grazing nearby and games of dice to play, Rhaissa's imminent wedding seems a world away. According to Tuareg tradition, the bride must remain in the bridal tent for a week before the wedding. During this time; "she must respect the rules of Takaraket", by not speaking to anyone or reacting at all to the celebrations around her. "Even if you take a needle and stick it into the bride, she'd say nothing. She wouldn't even blink", boasts one woman. But the young generation aren't what they used to be. "In the old days, one had lots of Takaraket. Girls today, well, all you have to do is touch them..." The prospect of marrying a stranger and leaving her family's home seems to fill Rhaissa with excitement. As the wedding approaches, her mother, Hawa, quizzes Rhaissa about her feelings. "Be honest, Rhaissa. Are you nervous? Are you scared about us taking you to your husband at night?" Rhaissa coyly giggles and admits she's; "looking forward to it". Satisfied, Hawa declares; "tomorrow, we start chopping wood for the tent". Already life is rapidly changing for Rhaissa. "From now on, nothing will be as it was before", states Hawa. "When one is married, one can no longer move around freely." As Rhaissa's best friend, Fatimata will guide her through the wedding proceedings. "She no longer does anything", states Fatimata. "I'm the one who brings her food". Fatimata seems ambiguous about her best friend's wedding. "I would be happier if Rhaissa, not her parents, had chosen her husband". Fatimata's parents have vowed Fatimata will be allowed to choose her husband herself. "It isn't love if the parents have arranged it", states her mother, "If there are problems later on with the husband, the wife will hold it against us if she didn't choose him". As Rhaissa disappears into the bridal tent, the celebrations begin in earnest. Outside, villagers arrive on camels, weighed down with presents. "Look at these fabrics and scarves - really high quality", gushes one woman. Rhaissa's friends rub potions into her skin and brush her hair with oil to prepare her for the big day. Finally, the day arrives for Rhaissa to meet her husband. Her family and friends accompany Rhaissa to her husband's tent. Then they remove the turban from the groom's head. And finally, the young couple are left to meet each other.
FULL SYNOPSIS
TRANSCRIPT

P R O F I L E The gebrueder beetz film production (GBF) is one of the few German production companies specializing in the production and distribution of documentary programs worldwide. The company was founded 2000 by the brothers Reinhardt and Christian Beetz and is based in Cologne with production offices in Berlin and Hamburg. GBF develops and produces creative award-winning documentaries, theme evenings, docu-soaps and in 2006 for the first time two editions of the cultural magazine programme METROPOLIS/Arte. Our goal is to produce creative documentaries not only for the German but also for the international market. Therefore GBF has established an extensive network of international co-producers and broadcasters worldwide. The company is maintaining successful work relations with all major German and European broadcasters, such as ZDF, NDR, SWR, WDR, HR, arte, 3sat, BBC, YLE, DR2, SVT, NPS, ORF, TV Catalunya, TSR, Multicanal and TV-stations in Eastern Europe. We are members of the German and European documentary associations AG-DOK and EDN.