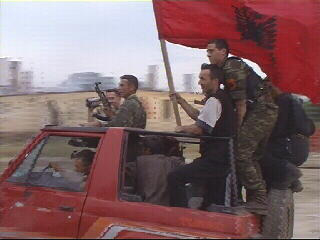 After the cease-fire of October 1998, the Kosovo Liberation Army, KLA or UCK started rebuilding and expanding their bases into neighbouring Albania. When NATO started bombing Serb forces at the end of March 1999, the KLA almost immediately launched an offensive into Kosovo. Includes aftermath footage of the massacres of two extended families.