Maasai- A Warrior's Rite of Passage

We enter into the world of the Maasai, embracing their traditions, participating in their cermonies. A stunning look at a people and place far removed from modern life. 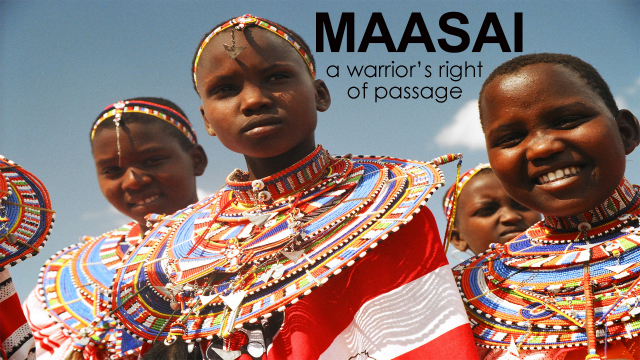 This visually stunning doc takes you deep into the natural and captivating world of the Maasai. There we unravel one of the last ancient tribal rituals of the Maasai Warrior. The narrative follows the Warriors as they prepare to undergo a unique rite of passage that will initiate them into Elderhood. Granted unprecedented access to the three day ceremony, which occurs once every eight years, the filmmaker gained a rare insight into the world of the Maasai.

To the sound of celebratory chanting, warriors from all over Maasailand congregate at Manyara. An air of excitement looms. The rite of passage, a three day ceremony is about to start. During this ceremony, the Maasai Warriors gather, celebrate and slaughter a bull in a grand and communal like finale. Drinking the bull's blood and consuming its flesh, Maasai Warriors will thus graduate into Elderhood. Ole Sankale has recently been appointed Chief Warrior. "All the Elders met and discussed who was the right warrior to lead this generation. It's like a vote and that's how I was elected" says Ole. It is his responsibility to make sure the ceremony runs smoothly. "As the Warrior Chief, I maintain peace in the community", says Ole. Three weeks before the ceremony Ole orders someone to retrieve fresh honey. This honey is infused with ginger root, sugar and water where it's left to ferment producing a traditional wine. This will be added to the bull's blood and drunk by all throughout the three day revelry. Whilst the men gather honey, Maasai women are sent out to collect firewood in preparation of the ceremony. The Massai women, as with the children, play a key role in the tribe and are not without their own initiation ritual. Once they reach puberty, they must perform an individual rite of passage before they can marry a Maasai Warrior and be assigned motherly duties. "I like the duties of a Maasai woman" says one. "With these duties I am no longer bored". During the second day of the ceremony, Ole sends out warriors to fetch green grass which will play a symbolic role in the rite. This year as the ground near Manyara is very parched, the warriors walk for miles. It is at this point that Ole will also select the warriors who will slaughter the sacrificial bull. "I will point to certain warriors and tell them what is needed". Ensuring there is enough food and drink for everyone is Ole's main concern. During the ceremony over 100 animals will be slaughtered. "I will point and ask for a cow or maybe twenty", states Ole. But one warrior has a problem. "There's not much grass for grazing, my cows are thin and not very healthy for slaughter". Ole agrees he does not have to donate an animal. Instead, he can help with the slaughter of the bull. At the climax of the ceremony, the elected warriors hold the bull down for slaughter. They drink the bull's blood, eat its flesh and with this they celebrate as they graduate into Elderhood. Once again the sounds of celebratory chants surround Manyara.
FULL SYNOPSIS
TRANSCRIPT