Srebrenica: Autopsy of a Massacre 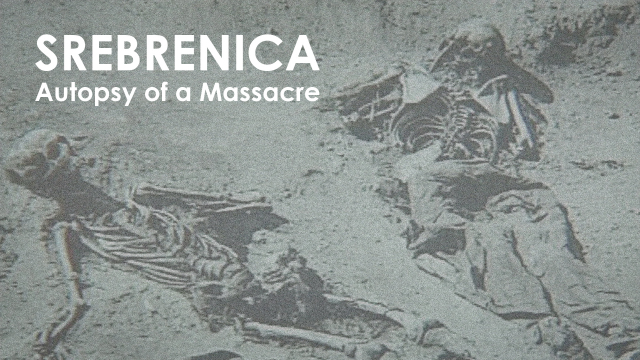 In July 1995, at the height of the Bosnian war, French policeman Jean-Rene Ruez, arrived in Sarajevo tasked with hunting down snipers. But after hearing rumours thousands of Muslim men were being tortured and executed, he quickly abandoned his original mission. Appointed Chief Investigator by the Hague, Ruez spent 13 years working tirelessly to prove the massacres were planned in advance. Haunted by all he has learnt and worn down by the weight of his responsibility, Ruez has sacrificed everything to try and hold the guilty to account. Through his eyes, we gain a fresh perspective on what happened at Srebrenica.

Everywhere Jean-Rene goes, a battered leather bag goes with him. "I'm terrified of losing it", he confides. "It never leaves my side". Inside the bag are hundreds of documents and photos. But its most valuable contents are a few minutes of blurry footage. A film Ruez spent years trying to hunt down. The images speak for themselves. One by one, hands tied behind their back, the prisoners step forward. Slowly, methodically, soldiers open fire. The last two men are given the task of disposing of the bodies. Soldiers call them "the lucky ones", imply they will be saved. But once their task is complete, they are murdered as well. "The awful truth is that no matter how shocking these scenes are, they do not reflect how bad other executions were", states Jean-Rene Ruez. Despite this footage and thousands of eyewitness accounts, the Serbian authorities refuse to acknowledge that a genocide took place at Srebenica. But to Ruez, silence means forgetting what happened. He has therefore decided publicise the findings of his investigation. "Crimes like this are the desperation of humanity", Ruez has dubbed the road from Srebrenica to Pilica, "the death axis". It's a route he's travelled many times, often under military protection. On either side of the road are dozens of execution sites and at least 43 mass graves. During one of our trips, Ruez learns that another mass grave has been uncovered. Rushing straight to the scene, he's able to pinpoint that the victims were killed in Glogoava by the fragments of tiles that are buried with them. "It's a shame because I was hoping the corpses would be those from Potocari. About a hundred of them are missing and to this day, we still have no idea where they can be." It was at Potocari that the first stage of Mladlic's plan was put into action. Under the watchful eye of UN peacekeepers, Serb soldiers separated the women from the men. "Don't be frightened. No one is going to hurt you", Mladic reassured a small child. "Everything's fine. Everything's fine". But his men have already been given their orders. "We were to execute them", testified Serb soldier, Drazen Erdemovic. Laid out in a hall are 600 coffins containing the bodies of the victims who have been identified. Ruez's work has enabled the families to start their mourning and proved that the massacres were masterminded and ordered by Radovan Karadzic and Radko Mladic. But at this moment, it's all too much for him. Confronted with the bodies, he breaks down in tears. "Working on a case, you end up knowing too much and the accumulation of details becomes extremely painful", Ruez confides. But, as he acknowledges, "it's almost indecent to talk about oneself in such circumstances. There is so much obvious suffering that it is impossible to talk about one's own". He's vowed only to give up when Mladlic and Karadzic finally stand trial. But after all these years, will that day ever come?
FULL SYNOPSIS
TRANSCRIPT