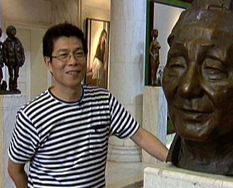 Wang Zhongjun is one of China's 415,000 millionaires and is head of Huayi Brothers - a Chinese media empire. What does this former Communist Party member turned tycoon have to say about China's communist-capitalist paradox?

In a world where these two political models were once polar opposites, Wang seems to have found a compromise. "I'm not sure if I'm a capitalist or a communist, I don't think people think much about 'ists' today. All we need to do is work hard to improve our lives and the lives of those around us," he muses in his glamourous Beijing home. Wang firmly believes the rich should be the first to be obligated to helping others. In China, an economic "superpower on steroids", state capital is rapidly being transformed into private wealth. Could entrepreneurs like Wang pave the way for a new socially responsible capitalist mindset in the country?
FULL SYNOPSIS
TRANSCRIPT