After the genocide, Rwanda faced the problem of truth and reconciliation. It's finally found a home-grown answer to their problem, the traditional Gacaca court. 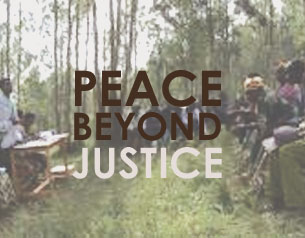 "Genocide is about wholesale slaughter and anarchy...about killing, day after day." Over a million Rwandans died in the terrible Genocide that swept the country in 1994. With peace restored, the government faced the problem of truth and reconciliation. With hundreds of thousands implicated in the slaughter the justice system was in paralysis. But by 2005 Rwanda had found a home-grown answer to their problem, the traditional Gacaca court.

"Nzabirinda Venante. Accused of the killing of Semuzimu, Makamusoni and Makamusoni's son. This is your last chance to plead guilty." The accused is standing before his village in pink prison pyjamas. In front of him, wearing their vibrant sashes of office are the Inyangamuyango, elders chosen by the community to be trained as judges. One of these elders stands and addresses the crowds, "If you are unsatisfied, you must tell us. You have the right to speak." The Gacaca courts are charged with the dispensation of justice "according to the understanding" of each local community so that the terrible ethnic divisions of the past half century can begin to heal, "a Rwandan solution to a Rwandan problem," explains Domitilla Mukantaganzwa.

Emmanuel Murangira was living peacefully at home in Murambi on the day the killings began. "They surrounded us here and started shooting and throwing grenades. Those who tried to escape were killed with machetes. My wife and children were murdered here. Then they buried them all, alive or dead." Wounded by a bullet Emmanuel managed to escape the killers by pretending to be dead. He then set off for Burundi and safety. But now he has come back, and as a witness to the killings is central to the Murangira Gacaca. For him, "Gacaca can achieve a lot of good things," but he warns of its imperfections, "when you observe closely you find people are not telling the truth." He is also scared of attempts to silence him, "when you don't take care, you die." Jean-Paul Mugiraneza is a political scientist with the IRDP. He tells of another troubling aspect of the court process, "there was a prisoner coming to confess and tell the court about his experience. The chief of the court happened to be a survivor time, and the prisoner admitted to killing his wife and children. He was the facilitator, but he immediately collapsed. It was very difficult". Even once the truth has been established, the Gacaca still faces challenges. Too often forgiveness is given "just with the tongue, not with the heart." Rebuilding trust within communities is tough - Jean Baptiste Mbaraga is a convicted killer who has been rehabilitated. He admits that "it is not easy to cohabitate because you feel ashamed," he also explains that some individuals refuse to welcome him back into the community.

But now, back at Nzabirinda's trial, as we listen alongside the community he devastated, it is hard not to feel hope. "I am also a killer like others. I ask forgiveness from God, from the government, and from those who lost their loved ones." This outstanding documentary charts the process of healing in this tortured land. Told from the hearts of the accused, the accusers and the government alike it is the story of the slow, heart wrenching discovery of an ancient trust. "Gacaca tells us where we came from, so as to lead us to the future." Director: Gregory McKneally
Further Information: www.newyorker.com/reporting/2009/05/04/090504fa_fact_gourevitch