Glory Days: My Life as a Sniper 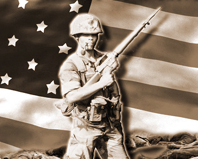 As soon as the rifle touched Sgt Rodriguez's shoulder, he knew he was going to be a sniper. At 20, he became a guiltless killing machine. This is his story of learning to kill and the challenge of how to stop.

Noel Rodriguez entered the US Marine Corps to be a journalist. He'd never held a gun or thought about killing. But as soon as he held an M16 everything changed. 'When they gave me my rifle, I just felt it. I knew in my heart that nobody was going to be better than me.' But when Rodriguez first killed he couldn't believe what he'd done. 'I sent it, and that was all I could think of. How could I send it?' Through believing he was killing to save others, he moved on and his mind blanked out any details from his missions. 'It's a defence mechanism for me, I forget everything.' He became one of the most dreaded killers his enemy ever encountered but one day Rodriguez finally knew he had to stop. 'I was losing my soul,' he explains. 'I've woken up with a body next to me with my knife in his chest and I couldn't remember doing it. I went straight back to sleep. That's not normal.'
FULL SYNOPSIS
TRANSCRIPT