Madagascar - Diary Of A Coup 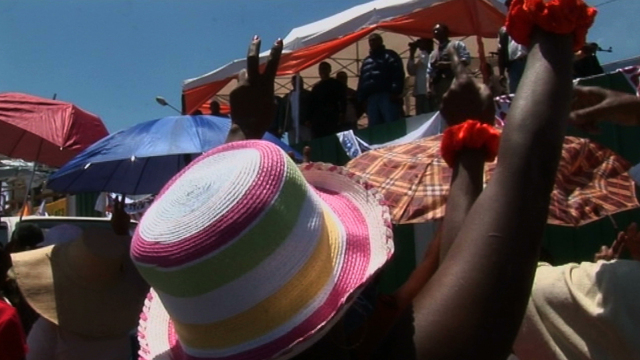 President Ravalomanana is scared. His people are protesting and former DJ Rajoelina has declared himself President. Yet with so much bloodshed and rioting can media shy Rajoelina''s coup ever succeed?

""I am ready to listen and I promise to find solutions to all your complaints,"" says an anxious Ravalomanana to an unhappy crowd. It could be a case of too little, too late. His opponents accuse him of corruption, and his people are rioting. Events reached a crux outside the presidential palace when 30 protestors are killed. Rajoelina stormed the palace to take the presidential oath, but fearing for his safety he''s gone into hiding, leaving the new prime minister Roindefo to hold the fort. Ravalomanana''s people refuse to step down, developing their own strategies such as dispersing crowds with gas. ""They are preparing a kidnapping against us"," reflects a fearful Roindefo. It seems Rajoelina''s coup still has a long way to go.
FULL SYNOPSIS
TRANSCRIPT