For the Palestinian Olympic team, getting to Beijing is already a victory 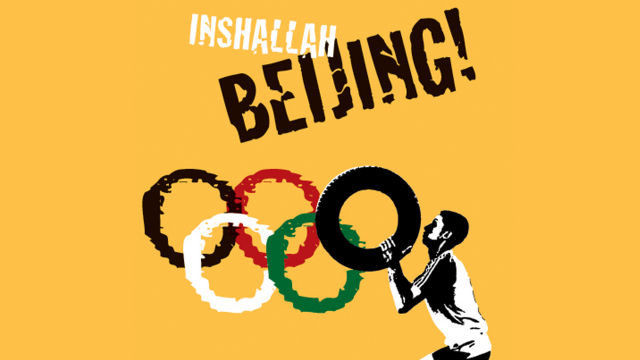 Ghadir dreams that at last someone will buy her some running shoes. Nader trains whilst dodging missiles and mines. Zakia can't get a permit from the military to get to the swimming pool. Meet the 2008 Palestinian Olympic team- poorly trained, ill-equipped and competing for a country that doesn't exist yet. Will the ultimate underdogs make it in Beijing?

'Long distance running takes a lot of patience and perseverance. Like life for us Palestinians' says Nader. He is Palestine's hope for the 5000m run. Yet his training routine will no doubt differ from many of his competitors in Beijing. 'Lift the tyres 12 times! Now put them down and run!' shouts his trainer. Nader has obtained several permits in order to leave Gaza for the Olympic games. Yet an Israeli officer may come and take him back to Gaza at any time. 'God willing, I'll get to Beijing' Nader mutters, determination in his eyes.

'When I'm running I feel good: I feel like I'm flying' says Ghadir. 16 years old and mischievous, she views running as an escape from the turmoil of growing up in a walled state. 'Everyone says that as long as I do sport I'll never get married!' she says with positive delight. But when the team finally scrabble together enough money to get to China, leaving Palestine for the first time and adjusting to a new culture, proves a hurdle all of its own. 'It's cooked Chinese style!' Zakia cries in disgust, pushing a bowl of chicken noodles away. 'No one has eaten anything' cries their exasperated trainer -'You don't understand 'warm up'?' smirks a rival coach- 'I want to go home' moans Ghadir. How will this ragbag team of wannabees, trained on tires and bullet-dodging, fare when the gun fires at the Olympics?

Francesco Cannito, is an author and director of advertising spots and documentaries. He has contributed to many Italian television programs and his short film Regalo di compleanno won the Premio Cinecittà Digital 2002 in Rome and the Prize for Best Short Film at Venezia Circuito Off 2004 in Venice, Italy. His documentary Water Not Included has been produced in 2007 in the Palestinian territories for ECHO (European Office of Humanitarian Aid  European Union). Luca Cusani, author and director, lives and works in Milan. He has realized various television reportages for Italian television and feature documentaries. Among them, "CRY SEA" has won the Ecovision Film Festival 2007 in Palermo, Italy; the 4 Screen European Film Festival 2007 in Paris, France; the FICMA 2008 in Barcelona, Spain and the Turin Environmental Film Festival 2008 in Italy. Michela Sechi, journalist and producer, works as an editor at Radio Popolare, a national independent radio based in Milan, Italy. During the last 9 years she has been covering
international news as a correspondent, especially in the Middle East, and she has produced many radio documentaries for Italian and Swiss Radio.