Does motherly love know no bounds? 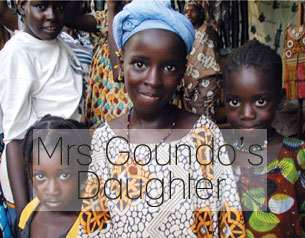 This is the incredible story of one mother's courageous battle to protect her two-year-old daughter from female genital cutting. It says as much about the right to asylum, as it does about this deeply-rooted and controversial tradition.

In a colourful, bustling village in Mali, 62 anxious-eyed little girls wait to be excised just as their mothers, and grandmothers were before them. "You must not cry", the mothers tell their daughters, though "the pain is very deep". In the distance, the chanting of Malian anti-excision activists can be heard. But they're drowned out by screams as the women excisors perform this ancient Islamic tradition. "An unexcised girl is not accepted here. Men will never marry her." Meanwhile, 4500 miles away in Philadelphia, a refugee from Mali, is desperate to gain asylum. Mrs Goundo is terrified that if she and her daughter are sent back to their home country, her daughter will be forced to go through the same excruciating process that she went through. She has the support of her doctor, who had "never seen anything like this before". And the backing of the medical community who cite the risk of infectious diseases such as AIDS, bleeding to death, and problems with sex and urinating. Yet there is no legal precedent for claiming asylum on these grounds. Goundo and her lawyer have taken a calculated risk... "Not to sound insensitive", begins the lawyer gesturing to a nervous Mrs Goundo, "but Mrs Goundo's daughter was born here. She is a US citizen" . Mrs Goundo explains that she has no one else to leave her daughter with. "Can't you stop your parents from circumcising your daughter?" the judge questions, confused that Mrs Goundo still speaks to her parents every day, that she still respects their traditions. "I cannot", she says firmly, "it is our culture". Then there's nothing left but an anxious vigil as the court comes to a decision. "I find that Mrs Goundo is eligible for asylum", declares the judge. But the government lawyer appeals, leaving Mrs Goundo devastated: "I want Djenabou to go to university. I want her to be a doctor. To be someone important!". It's three years before the appeal is finally dismissed and Mrs Goundo is accepted as a US citizen. Mrs Goundo tells herself that never seeing her parents again is a small price to pay for her daughter's health; hoping one day that she may be able to return, and watching the Malian voices of protest gaining strength: "Today, we have entire villages that have decided to abandon excision", cries a former excisor, "It's a long fight but it will be won". Motherly devotion has never come at so high a cost. LEARN MORE.
WATCH MORE.
JOIN THE DISCUSSION.

Official Selection, Human Rights Watch Festival, 2010 "Heart-wrenching testament to the integrity and solidarity of women in the face of staggering adversity" - VILLAGE VOICE "Gracefully depicted and painstakingly observed." - NEW YORK MAGAZINE "Packs a sharp punch equal to that of films twice its length..." - FILMCRITIC.COM
A co-production of Attie & Goldwater Productions, Inc. and the Independent Television Service (ITVS), with funding provided by the Corporation for Public Broadcasting (CPB).
FULL SYNOPSIS 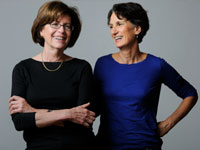 Barbara Attie and Janet Goldwater have made documentaries on women's issues for US public television for over twenty years. For this project, they teamed with Sabrina Schmidt Gordon, who has produced for public television and the National Black Programming Consortium. Their combined experience includes probing documentaries on topics ranging from abortion politics in Latin America to gender politics in hip-hop. 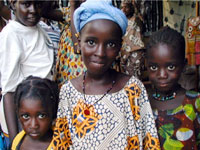 "We were first sent to Mali on assignment to shoot a short film to address the question: is female genital mutilation/cutting an Islamic practice? The answer (although it is most often practiced by Muslims, it in fact pre-dates Islam), is explained in the resulting short film. Working on this project we discovered how little we, and Americans and Europeans in general, understand about this practice that affects up to 140 million women worldwide."