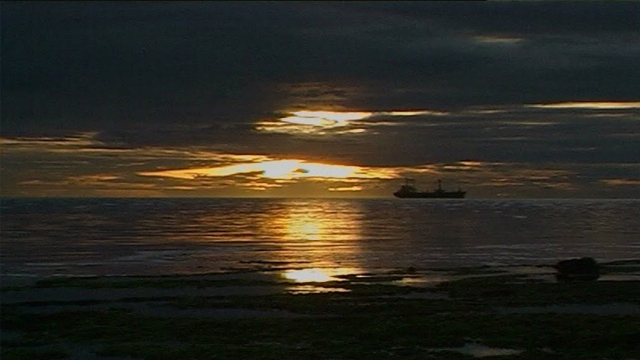 In July 1998 the people of Biak say the Indonesian military brutally killed 150 people after a small group of protestors had dared to raise the Free West Papua flag. The government acknowledges only 1 death. Today the Biak massacre has become a driving force of resistance just as the Dili massacre did for East Timor. But the independence movement in this resource-rich land has a tough battle ahead.

12 year old Eduard was dragged through the streets, saw his friend shot dead and went on to witness the Indonesian navy ship where women were raped and the dead thrown overboard. Other reports corroborate his accounts. Secretly filming a meeting of government surveyors, we hear their plans to settle 500,000 Javanese here as part of the transmigration policy. They say their policies will bring development to the 'uncivilised' Papuans. Indigenous West Papuans say 'development' has so far meant nothing but abuse from an army who view their tribal lifestyle with contempt. Human rights workers show us pictures of tortured highlanders. With 160 people killed in 6 weeks of religious rioting in Ambon, and continued unrest in East Timor, Aceh and increasingly in Irian Jaya, there is no doubt that Indonesian unity is in profound crisis. Produced by ABC Australia
FULL SYNOPSIS
TRANSCRIPT