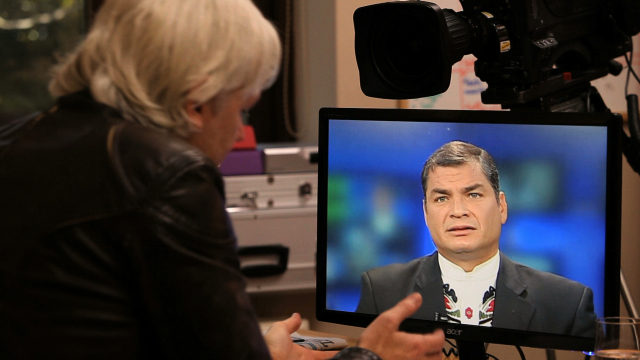 In Assange's most incisive interview to date, President Correa speaks frankly about his nation's relationship with the USA, media corruption and the future of South America.

The discussion opens with the circumstances surrounding the attempted coup d'etat in Ecuador in 2010, during which the president was taken hostage. Following the coup attempt, Correa embarked on a furious and controversial counter offensive against US interests in the country. He attributes the media's support of the coup in 2010 to the vested interests of corporate power and its control of key aspects of Ecuador's institutions, even elements of Ecuador's military and police. He explosively claims corporate owners of the media "disguised as journalists, are trying to do politics, to destabilise our governments so that no change takes place in our region, for fear of losing the power they have always flaunted".
Episode 1: Hassan Nasrallah Episode 2: Slavoj Zizek and David Horowitz Episode 3: President Moncef Marzouki Episode 4: Alaa Abdul El-Fattah and Nabeel Rajab Episode 5: Moazzam Begg and Asim Qureshi Episode 6: President Rafael Correa Episode 7: Occupy Wall Street Episode 8: Cypherpunks - Part 1 Episode 9: Cypherpunks - Part 2 Episode 10: Imran Khan Episode 11: Noam Chomsky and Tariq Ali Episode 12: Anwar Ibrahim
FULL SYNOPSIS
TRANSCRIPT