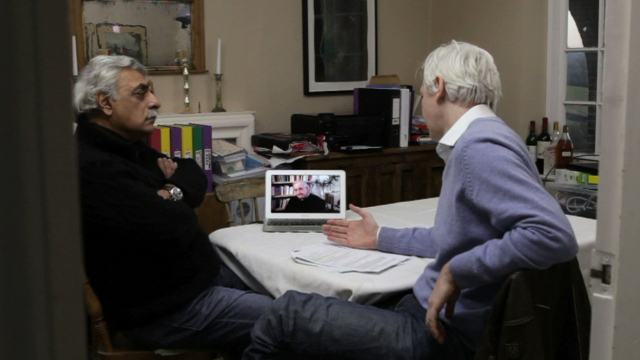 Noam Chomsky and Tariq Ali are two giants of the intellectual left. They join Julian to discuss protest movements, democracy, and how the West completely failed to anticipate the Arab Spring.

Chomsky identifies that the warning signs were there, with the roots of the protests in Tahrir square in labour movements and protests taking place in Egypt as early as June 2008. He admits "You asked if I predicted it, and no I didn't. But it's now happening worldwide." As with most in the West, neither man saw it coming, but both agree on the causes of the global cycle of protest and revolution. "Democracy has become petrified"; the increasing ossification of social mobility, and the increasing inequities of wealth and power, are all the result of the failure of Western democracy. According to Ali, ""we are witnessing that democracy is becoming more and more denuded of content. It's like an empty shell. This is what is angering people. They feel 'whatever we do, whatever we vote for, nothing changes."
Episode 1: Hassan Nasrallah Episode 2: Slavoj Zizek and David Horowitz Episode 3: President Moncef Marzouki Episode 4: Alaa Abdul El-Fattah and Nabeel Rajab Episode 5: Moazzam Begg and Asim Qureshi Episode 6: President Rafael Correa Episode 7: Occupy Wall Street Episode 8: Cypherpunks - Part 1 Episode 9: Cypherpunks - Part 2 Episode 10: Imran Khan Episode 11: Noam Chomsky and Tariq Ali Episode 12: Anwar Ibrahim
FULL SYNOPSIS
TRANSCRIPT