Swapping bananas for marijuana in the Caribbean 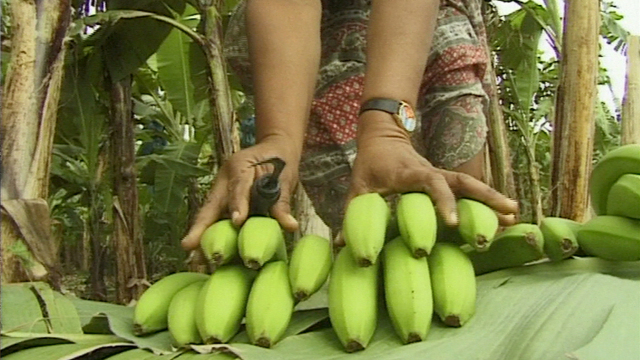 With the future of the banana business in jeopardy, Caribbean farmers are turning to marijuana production instead.

Nebo was a banana farmer prepared for the WTO’s damning decision. “The more the decline in the banana, the more the production of marijuana. Where there is a market I will plant.” And at 2000ft up, away from the gaze of police, the holy herb is flourishing. The hardy marijuana rastas, tending these crops earn 10 to 20 times as much as banana farmers. Tipping up a fertilizer bucket of compressed ganja Bungo proudly displays his cannabis castle worth $20,000. It’s a risky business though for not only are the US squeezing the banana industry, they are at the forefront of a Caribbean drugs crackdown. Last December US marines descended from the skies in a wave of helicopter attacks on the illegal ganja fields. They say they destroyed over a million plants. The growers though are unrepentant: “We are concerned about drugs like you are. But you can’t expect us to be giving everything and getting nothing in return.”
FULL SYNOPSIS
TRANSCRIPT