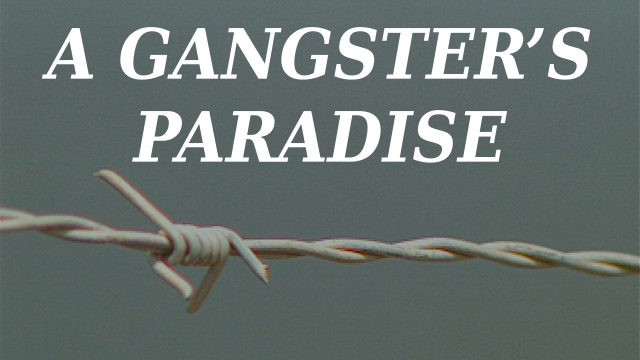 For many South Africans, law and order has collapsed. But this is a nation which is used to fighting back. 'In South African law it's permitted to even kill someone in self-defence' says the manufacturer of a car designed to emit a ball of fire if anyone tries to hijack it. He claims South Africans are tired of 'liberal Europeans' who don't understand how serious the country's crime problem is. In the ghettos lies a world where violence begets violence. Deaths are avenged, and mothers are left to weep at their son's graveyards. Even young widows talk of revenge.

Sirens wail, lights blare, a chase is on. This is a reconstruction. But South Africa's crime problem is very real. Police in choppers follow stolen cars with satellite tracking. They have a good recovery rate, with 21st century technology pitted against sheer desperation. 'Pull over! Pull over!' Another crook is bagged. For many white South Africans, law and order has collapsed. Terror lurks even at the gates to their homes, a favourite haunt of car hijackers. Footage of carjackings shows how easy it is. But this is a nation which is used to fighting back. 'In South African law it's permitted to even kill someone in self-defence' says the manufacturer of a car designed to emit a ball of fire if anyone tries to hijack it. He claims South Africans are tired of 'liberal Europeans' who don't understand how serious the country's crime problem is. Even a breakdown in the wrong part of Johannesburg can be fatal. Peter Cvetko was murdered in his car waiting for the AA. His wallet and mobile phone were gone. Stories like this fuel the whites' perception that you 'really have to fight for your life'. This family is packing up and leaving the country. Little Chloe has to be let into school by security and her parents say crime means they can't afford to stay. The flight of skilled people from South Africa is having a major impact on morale and productivity. All over the white suburbs it's the same tale of woe: endless burglaries, insecurity, fear. All manor of tripwires are on the market. One man has a network of them concealed in his garden. Whilst there is an awareness of why people steal, there's no understanding of why so many are being killed for it. Of course violent crime also affects blacks, and they are joining in the call for criminals to be dealt with in a harsher way. There's a growing argument for reinstating the death penalty. A grieving mother explains why she feels the killers of her daughter Shelley deserve to die. South Africa has porous borders and a sophisticated transport network, so it is perfect for syndicated crime. Since the last elections Nigerians drug dealers have taken over parts of Johannesburg. Outside the notorious Sands hotel one prostitute explains how a history of violent rape has led her to a life of selling herself and cocaine abuse. We visit the brothel where she does her tricks. 'Most of us are in control' she tells us lucidly between drags on a crack pipe. 'We stand firmly against gangsterism and drugs!' is the call to arms of PAGAD, a militant Muslim organisation which is taking the law into its own hands. An angry demonstration against police apathy boils over. Gunshots are heard. A man with a wounded head reveals he is wearing a bullet belt. Another who has been lynched by PAGAD vigilantes receives treatment on the ground from paramedics. Suddenly he is firebombed and set alight. But the gangsters and the drug dealers are also having their own demonstration. A broken bottle serves as a makeshift pipe and is greedily passed around. They claim they can have a peaceful society without the influence of PAGAD. But it's hard to believe with a glimpse into ghetto life. Police raid the township suburb to recover a stolen car. Unfortunately they find just pieces, the car has already been broken down into saleable parts. In a petrol-bombed house two gangs of teenage boys are playing out lethal vendettas. 9 year old boys act as couriers for the drug dealers. If they are caught they will be safe from prosecution and the gangs know this well. This is a world where violence begets violence. Deaths are avenged, and mothers are left to weep at their son's graveyards. Even young widows talk of revenge. Inside a prison a man faces seven years for possession of firearms. Known as 'the university of crime', we wonder if prison has saved him from a worse fate. The mob ruled when it black against white. The past has depersonalised, dehumanised. The ANC defends the progress it has made in the past five years. But the funeral laments in Richmond still sound the same as they did back then.
FULL SYNOPSIS
TRANSCRIPT