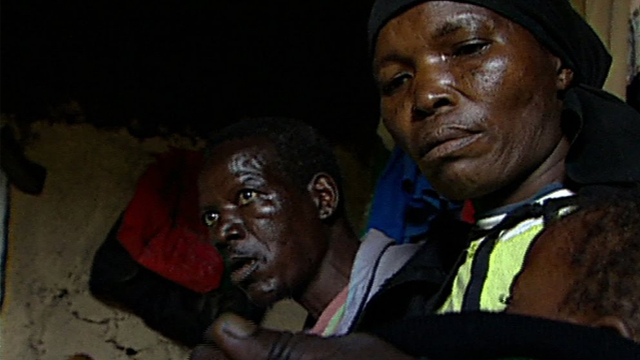 The silence surrounding HIV in South Africa is deafening, and is strangling this young democracy. But there are those striving to tackle the lack of awareness and misconceptions, given the strong taboo surrounding the disease.

In the hills surrounding KwaZulu Natal, an old woman dies of AIDS alone in a shack. Few will care for her. An AIDS carer here was stoned to death when it was found out she too was HIV+. The epidemic has got so bad that 70% of all patients in one of Natal's' hospitals are suffering from AIDS-related illnesses. If they are lucky they will get antibiotics; but they will no't get AZT - the government says it cannot afford it even though it's the most effective drug. Preventative education efforts have been hampered by sexual taboos. At a press conference, Mandela tells of his advisor's advice back in 1991; ""[I said] I want to talk about AIDS and he said ...please don't. If you continue you will lose the election!"" Charities are trying to carry on from where lacklustre government campaigns have failed. To an assembly of school kids, an AIDS volunteer puts it plainly: "You get HIV from sex. You pretend you don't know what I'm talking about, but I know you do!" Hopefully her words will make a difference to these 14 year-olds and begin to stem the tide of new infections. Produced by Hedgehog Productions
FULL SYNOPSIS
TRANSCRIPT