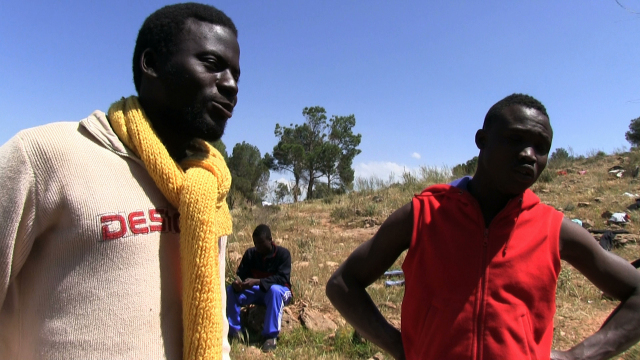 Every year thousands of Sub-Saharan Africans enter Morocco hoping to make it to Europe as immigrants through the Spanish enclave of Melilla. Paying Moroccan security forces to keep them out, the EU is funding a brutal system of violence and abuse.

"We've been here two years now. I live in the forest like an animal", says 16-year-old Bassit. Thousands of people like this young Ghanaian man attempt to pass through Morocco into Europe each year, enduring horrific conditions. At the Spanish enclave of Melilla, the EU has funded 11km of booby-trapped razor wire fences to keep them out. Those who jump the fence and avoid "holes in their heads and broken bones" end up in a detention centre designed to hold 480, crammed with over 1000 people. "The border is a brutal place with no law", says one interned migrant. "The EU give money to the Moroccan king, who sends his army to beat immigrants up. They've just washed their hands of it. That's a crime."
FULL SYNOPSIS
TRANSCRIPT