This powerful film gets under the skin of Colombia's guerrillas. 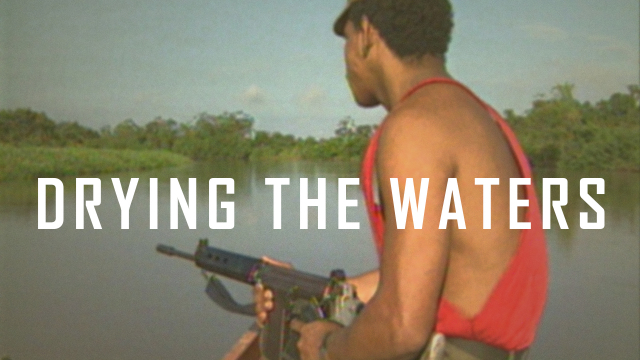 Deep in guerrilla territory drug growers' tip their precious harvest of coca leaves into a worn oil drum. In their warehouse laboratory they sweat until their mulching and stirring yields a sack of white gold: raw cocaine. In this territory, such rich rewards must be shared with the guerrilla.

With calculator and log book a FARC guerrilla calculates their cut. A high-ranking member of FARC command defends their use of drug money. "It isn't true that we are a drug cartel. As there is a war tax in Colombia against the guerrilla, paid by the powerful, we also charge with a war tax, but we do it to defend the poor class in Colombia" There are now one and a half million displaced persons in Colombia with no end to the war in sight. FARC already control 40% of the country and they're gunning for more. "We've won our space...we're closer to the cities...logically, the course of the fight has to be in that direction," says a high ranking member of FARC's command. In the next few weeks Bogota itself could come under attack. A former general predicts the day when Colombia will be split between a guerrilla controlled South and an army held North. Securing rare access into a key guerrilla camp we witness the intimacies of their daily lives. In battle fatigues, berets and Stetsons young men and women polish their guns, bathe in the river and gather to watch football on their portable TV. Everyone has a story to tell. "The army axed my door...I had to join the guerrilla." But the story of Colombia's civil war has departed from the dynamics of guerrilla fighting government, it's become the army and paramilitary against civilians. Guerrilla video captured the legendary meeting between a President Pastrana and FARC leader Manuel Marulanda Velez. On plastic chairs by a jungle heli-pad, FARC and a fresh-faced, optimistic Pastrana agreed to negotiate peace. But the most important players were not there. "No form of ending the war is going to work out for the military", says political expert Alejandro Reyes... "[the army] are afraid of being charged for war crimes... and delegating the war to the paramilitaries." Backed by a moneyed elite the army and paras fight to protect their oil, cattle ranching and banana benefactors. The paramilitary has made civilians their principal target. Living by their Spanish motto... the paras say that the guerrillas move around the civilian population like "fish in water" and to catch your fish you must first "dry the water". In the banana-growing zone of Uraba in Colombia's northwest, Maria's village was even bombed. "If they want to fight with the guerrilla, let them fight. Weapons against weapons. But we're just poor people, we have nothing to do with it". In this hotbed of rural unrest the guerrillas were recruiting well. But the army could ill afford to loose this rich land... paras moved in and razed the area. Images of para gunfights attest to their violence. Followed by scenes of the hideous aftermath: the broken and swollen bodies of civilian men, women and children who could do nothing to avoid the para's wrath. Refugees from the fighting now crowd the slums of Bogota. In rags, children walk by open sewers between houses of scraps. In Barrancabermeja, the centre of Colombia's petrol industry, the paras roam the streets at night hunting down guerrilla sympathisers in return for petrodollars. Here they look for allies of the ELN, Colombia's second largest guerrilla movement. Thousands of people are 'disappeared' in this city by the paras. "It's not true that my children were guerrilla. It's a big lie!" cries one mother helplessly as she discovers her son and daughter were taken in the night. Through the slits of their trademark silk hood, an ELN guerrilla's angry eyes meet the camera. "We know there is bloodshed", he says "But we must go on resisting terrorism by the State". With huge political and historical insight, this powerful documentary delves into the reality of Colombia's brutal civil war. Produced by Icaro Productions
FULL SYNOPSIS
TRANSCRIPT