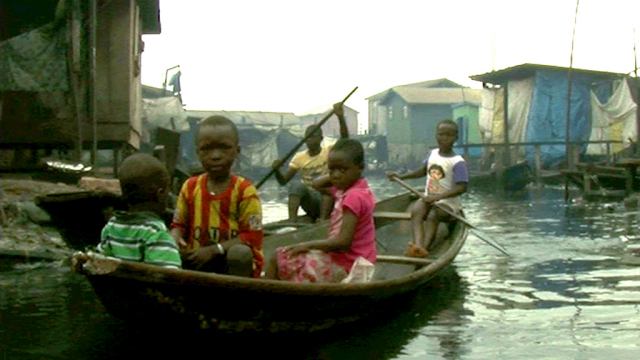 Lagos is the world's fastest growing megacity, riding on a lucrative oil industry and expanding economy. But while skyscrapers furnish the business elite, millions in the city's slums wonder if they will benefit.

"Lagos will become the financial hub for the continent of Africa", says David Frame, the managing director of Eko Atlantic. He is in charge of building an 8km sea wall and dredging the Atlantic ocean, creating a new foundation for a business waterfront. The audacious plans may seem the stuff of fantasy, but a lot is staked on the success of the new development, to be finished in 2019. "The evolution of Eko Atlantic will change the face of Lagos, and open a new gateway to your success in Africa", booms an advertisement. As forecasters anticipate the expansion with glee, the nearby fishing community of Makoko remains beset by Third World problems. The town's Chief Francis begs for aid. "The government should reconsider us as human beings and help us for improvements of this community", he says. Produced by Dateline, SBS Australia
FULL SYNOPSIS
TRANSCRIPT