Forest of the Dancing Spirits

The Aka tribe: a rare and stunning insight into an endangered way of life 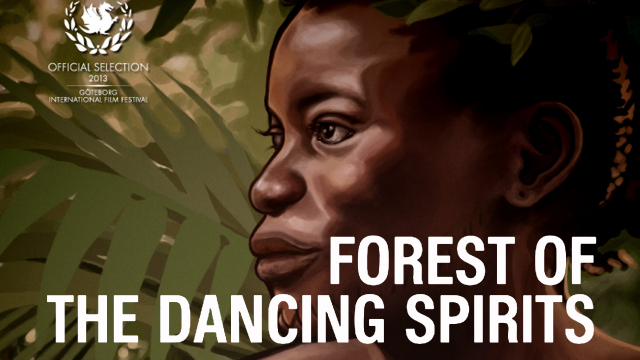 Deep in the mists of the Congo Basin, undisturbed by civilisation, live the Aka - an ancient tribe of nomadic pygmies. Theirs is an existence built on magical rituals and sexual power, lived beneath a canopy of ancestral myths. But with a logging company set to raze the rainforest that cradles their world, it is also one on the verge of extinction. Clever, fresh, and endearingly profane, this is a visual love-letter to an endangered people.

Human wails ring out over the sounds of the Congo's teeming wildlife. Encircling the spot where an Aka woman in the throes of labour lies on her back on a bed of leaves, a throng of her fellow tribeswomen await the child and attend to the mother. In a matter of minutes it's all over. Baby and placenta are ejected unceremoniously onto the forest floor; the umbilical cord is cut with a sharp piece of bark. From their perches on their mothers' backs, children watch the unfolding scene with curious eyes. The cycle of life holds no mystery to even the youngest Aka, who are born and live close to nature. The Aka hunter-gatherers have survived with almost no contact with the outside world for generations. "Komba founded everything. The animals, the forest, everything." The tribe are spiritual people. They believe they were gathered together to provide company for the lonely deity Komba, who once lived with them in the rainforest but has now left the world of humans. "Now everything belongs to the Makondi". The Makondi, or dancing spirits, are said to preside over the sexual mores of the the Aka people, favouring the faithful and ruthlessly punishing misconduct. Within this tight-knit community we meet Akaya and Kengole, a young couple whose greatest desire is to have children of their own. Yet whilst in many ways this remote tribe seem to exist in a different time from the rest of us in the 21st Century world, there is a surprising common humanity that shines through in this intimate portrait. From discussions on divorce and abortions, to profane banter and gang fights, to frustrated domestic mutterings of "why am I the only one who cleans up this pigsty?", daily life in this community is touchingly similar to our own. "I am glad you found us, Linda, and that you want to share our story." The Aka welcomed filmmaker Linda Vastrik for the seven years she spent living among them, sharing their most intimate moments and most sacred rituals with her. The result is a rare and stunning insight into an increasingly endangered way of life. 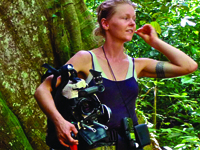 Linda Västrik, Director, was born in 1972 in Gothenburg, Sweden. In 91-92 she studied photography at ICP in New York under the influence of Cornell Capa. Later she studied direction of Documentary film at the Drama Institute in Stockholm. She graduated in year 2000. In the same move she released the greatly awarded documentary Pappa och Jag/Dad and Me on Cinema in Sweden. Pappa och Jag/Dad and Me caused a long and serious discussion in media. Since then Linda has been working with writing scripts for fiction, producing and directing animation and as Cinematographer for documentaries. 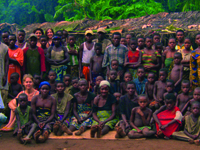 Six years ago, I lived inside the rainforest of the Congo Basin. I lived together with the indigenous people of the forest and moved in the tracks of their ancient parents and their favourite places to hunt, sleep, sing, dance, deliver children and fight. During this time, the forest that the group I was living with was completely logged. Four years later, I returned to the North of Congo with my camera and my sound technician to an area not yet logged. Together we lived with Ikonji, Akaya, Debota and their friends, relatives, Spirits, Gods, and dogs for four months. They have a deep trust that the forest will always be there for them, they love the forest as they love their own bodies. And we love Akaya, Debota and Ikonji as our best friends so we will do our best not to let them down.