The story of the indefatigable women fighting for the dispossessed and abused children of Durban, South Africa. 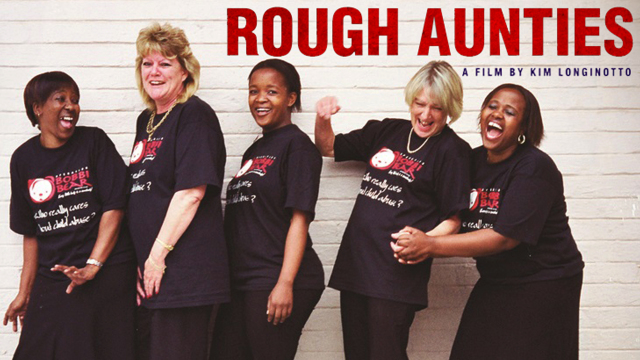 Fearless, feisty and resolute, the "Rough Aunties" are a remarkable group of women unwavering in their stand to protect and care for the abused, neglected and forgotten children of Durban, South Africa. This iconic Sundance-winning documentary by Kim Longinotto follows the outspoken, multiracial team of Operation Bobbi Bear, Thuli, Mildred, Sdudla, Eureka and Jackie, as they wage a daily battle against systemic apathy, corruption, and greed to help the most vulnerable and disenfranchised of their communities.

"I want that man inside. Honestly I need to have that man arrested, because he's running around threatening the victim", Auntie Eureka shouts down the phone to the police inspector. They have released a perpetrator without charge. Before supporting the police on a raid an inventory is taken: "everybody got your torches? Got your bullet-proof vest? And your firearms? most important". The team accompany police raids with the victims in order to positively identify the perpetrator. Breaking down doors, carrying weapons, and chasing down criminals, the women are a group of real-life super heroes. As the child victims tell their stories, the Aunties get them to mark what happened to them on stuffed bears. The children need strong support to build up the courage to report what has happened to them, in the face of obstructions from their immediate family. Often it is considered a "family matter", at other times the child will be told "you brought this onto yourself, you wanted to be raped". The Aunties work hard to counteract the culture of victim-blaming, and instil an understanding of the need for these endemic issues to be openly discussed. "I've become a rough Auntie since I've been at Bobbi Bear". The Aunties are toughened by the horrors they've witnessed, but their faith in humanity and justice is unfaltering and they cannot be discouraged by the apathy and cruelty they constantly battle against. Auntie Thuli explains how "immediately you see the perpetrator, you just fume and feel like strangling this stupid thing". Thuli channels this anger into her work at Bobbi Bear. With great charm, humour and tenacity the Aunties work together to cross racial, social, and political boundaries to reach those who are most in need. As the women encounter the victims and perpetrators of abuse their own personal stories of heartache, loss, and abuse are revealed. Rough Aunties is both the inspirational story of people's capacity to take positive action, but also a shocking expose of the lack of institutional support for vulnerable children in South Africa.
FULL SYNOPSIS 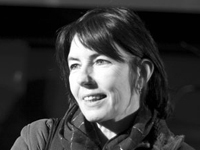 Kim Longinotto is one of the preeminent documentary filmmakers working today, renowned for creating extraordinary human portraits and tackling controversial topics with sensitivity and compassion. Her films have won many international awards including, the Prix Art Essai at Cannes for SISTERS IN LAW, a BAFTA for DIVORCE IRANIAN STYLE and the 2015 Directing Award at the Sundance Film Festival for DREAMCATCHER. Her other Award winning work includes, DREAM GIRLS, THE DAY I WILL NEVER FORGET, SHINJUKU BOYS, GAEA GIRLS, HOLD ME TIGHT LET ME GO.