Follow one young filmmaker's journey deep into the heart of the conflict in Ukraine. 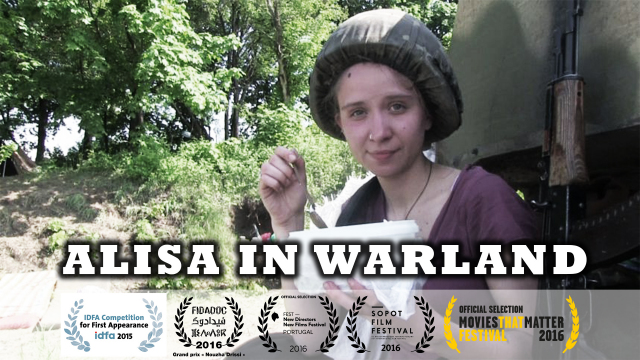 In the midst of revolution and civil war, a filmmaker sets out to find herself. From the barricades of Maidan Square, to the frontlines in Donbass, to the safety of a Parisian apartment, Alisa struggles with her love for boyfriend Stephane, her impartiality as a journalist and her duties as a proud Ukrainian. Constantly treading the line between director and subject, filmmaker and fighter, will Alisa leave this conflict with her love, and her life, intact?

Alisa laughs as she is wooed by a camouflaged soldier. "Hot as a volcano and strong as the wind that's your kiss on my lips, my beloved girl. Whenever you are near me, it's like I am drunk.... I drink drop by drop till the very bottom. I didn't live until I met you". Alisa is distraught when she later discovers her suitor has been killed on the battlefield.
As the sun rose to the sounds of gunfire and grenades, the young film student sets out to document the monumental events taking place in Kiev. In the midst of the fighting Alisa meets Stephane, a French journalist. "If it weren't for the revolution, we wouldn't be together. Even our first kiss was on Maidan". Together, the couple set off to Donetsk to report on the budding separatist movement. They are shocked by the strength of anti-Western fervour there. After splitting up, Alisa is taken prisoner and interrogated by pro-Russian paramilitaries.
Undeterred by the trauma of imprisonment, Alisa returns to the frontline, with the notorious far-right Pravy Sektor. "Russia propaganda was making them look evil. Pictured them as bloodthirsty nationalists. But what I saw were ordinary guys". They are amateurish, trying to work artillery from printed paper. "Wikipedia doesn't say anything. We need a real manual", complains one of the soldiers.
Alisa finds kinship and excitement with the Pravy Sektor fighters. Upon her return to Kiev she is already preparing to go back. But her enthusiasm for battle, and her growing passion for the fight worries Stephane. He feels she is overstepping the mark, becoming too involved. "Stop playing at being a soldier. There is no need", snaps Stephane. "What if I become a soldier?" replies Alisa. She is becoming confused about where her allegiances lie.
Alisa In Warland is both a deeply personal story of love in time of war, and a fascinating insight into the ongoing conflict in eastern Ukraine.
FULL SYNOPSIS
TRANSCRIPT 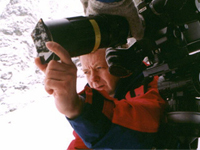 Alisa Kovalenko was born in Zaporozhye, Ukraine in 1987. She studied journalism at the Shevchenko Kiev State University between 2006 and 2011 before going on to study documentary directing under the supervision of Alexander Koval at the Karpenko-Kary National University of Theatre, Film and Television in Kiev. In 2015 she graduated from the DOK PRO course at the Andrzej Wajda Master School of Film Directing. She previously directed the full-length documentary Sister Zo about a female football player coming to terms with her troubled family life.

Liubov Durakova was born in Kharkov, Ukraine in 1986 and graduated from the Moscow State University at the Department of Mines and Petroleum in 2007. Like Alisa, he studied cinema documentary directing under Alexander Koval and graduated from the DOK Pro course at the Andrzej Wajda Master School of Film Directing in 2015. He has previously worked with Alisa on Video-poetry of Maidan and Sister Zo.

Miroslaw Dembinski is a teacher at the Polish National Film School in Lodz. He has made documentaries for over 20 years and received over 80 international film festival prizes for his work.


The move tells us the dramatic story of a Kiev film student who takes part in a protest on Maidan. Driven by documentary filmmaker instinct, but also by a sense of civic responsibility, the observer is gradually turning into a participant of those events. When the war in the East of the country begins, Alisa goes there with a camera. She reaches the hottest spots on the front. She is taken prisoner for a few days by separatists. Nevertheless, she does not give up filming everything happening around her. The result is a very personal film-diary directed by Alisa Kovalenko and Liubov Durakova.