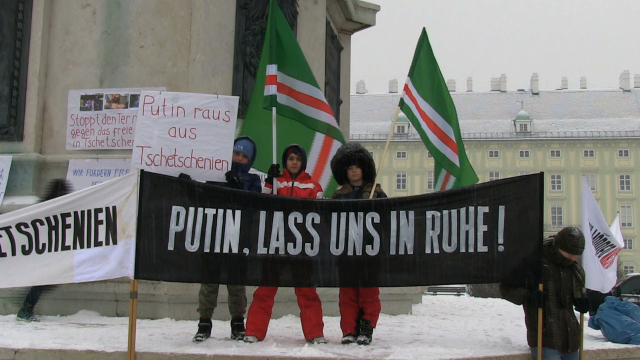 Since Putin placed Ramzan Kadyrov as leader of the Chechen Republic, his rule has become increasingly severe. Anyone who criticises the regime faces great danger, even beyond the borders of Chechnya and Russia.

"Any person who talks about the situation in Chechnya, anyone who tells the truth, needs to fear for their lives", says Mansur Sadulaev, a former resistance fighter. He is attending a Chechen protest in Vienna in response to the public humiliation of a couple on national television - after they dared to question Kadyrov's beneficence. Even in Europe, dissident Chechens are not safe from the creeping arm of the state, following threats made publicly by Kadyrov: "Their relatives in Chechnya must be told to control their relatives in Austria. If they don't do this, then we will make them." Mansur himself has been personally threatened, after a video of him criticising the regime went viral in his homeland. Mansur knows to take Kadyrov's threats seriously; in January 2009, former presidential bodyguard Umar Israilov was shot dead in broad daylight in the Vienna suburb of Floridsdorf. Israilov had recently lodged a lawsuit against his ex-boss at the European Court of Human Rights. Meanwhile, Kadyrov has also developed a reputation for his extravagance - boasting an extensive collection of luxury cars, racing horses and even a private zoo, his personal fortune continues to accumulate; as long as he retains Putin's favour and his hold on the Chechen Republic.
FULL SYNOPSIS
TRANSCRIPT