Did you know Santa uses a black slave to help out with all those presents? Well in Holland he does! 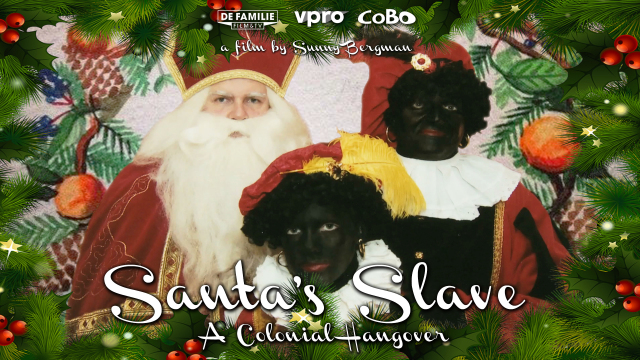 Every Christmas in the Netherlands, the same debate rages over Black Pete, Santa's black-faced assistant who is played by a blacked-up white person. Sporting an afro and huge red lips, the character is reminiscent of racist colonial caricatures of black people, like the infamous 'golliwog'. But in Holland there is huge resistance to its banning, with supporters claiming it is an innocent tradition for children. The debate reveals a society at odds over how to deal with racism, and unable to confront its colonial legacies.

Santa Claus and his two skipping black-faced helpers are drawing looks in London. People are shocked and angered by the sight of the Black Petes parading through a park. By chance, Russell Brand passes by. "What this does is it dehumanises people that are of a different ethnicity and reduces them to a lower status of either toys, or a degenerative role as servants…It's a colonial hangover" he remarks. Forced out of the park by angry members of the public, the Christmassy trio will return to Holland, where people are more accepting of this tradition.

Sunny Bergman is embarking on a personal journey to get to the bottom of the Black Pete debate. As an anti-Pete activist, she is aware of its racist connotations. But what she can't understand is the ferocity of the reaction in defense of Pete. Prominent black activists Quinsy Gario and Kunta Rimcho both receives swathes of racist and homophobic abuse. Gario believes it is due to people's childhoods. "If you can't feel this resistance to Black Pete it makes you feel physically uncomfortable when the issue is raised, as your body has totally different memories".

Talking to her friends about race reveals to Sunny the extent of racism remaining in Holland. One black friend tells her, "I used to drive a BMW, but I got rid of it. Within six months I was stopped 32 times by the police" . To put this to the test, Sunny employs three friends, one white, one North African, and one Caribbean. Each spends 30 minutes sawing through a bike lock in the street. Both of the non-white subjects attract negative attention, even of the police. The white subject is ignored, and at one point even offered help.

Sunny's personal analysis of the Black Pete debate unveils the misconceptions regarding white privilege, unconscious prejudice and racism that are prevalent within Holland today. And brings to light the reality that Dutch society has failed to come to terms with its colonial past, despite being seen outwardly as a pioneer in social justice.