Defying the Russian state through art 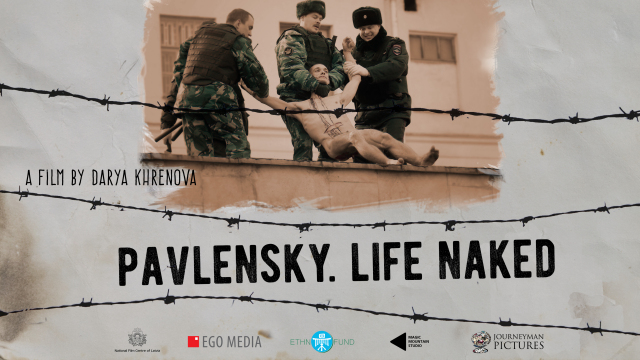 Petr Pavlensky, artist and activist, is in the vanguard of forging social change in Russia. Through an array of courageous performances, he acts as society’s conscience in the face of an increasingly totalitarian state. From lying naked in a coil of barbed wire, to nailing his scrotum to the floor of Red Square, his acts of defiance aim to spark debate and catalyse reform. This doc follows his mission to challenge the state.

"We want freedom! We want freedom!" With this as their chant, an angry crowd decries the regime's increasing intolerance of political dissent. It is in this climate of governmental oppression and public protest that artist Petr Pavlensky stages his forceful acts of defiance against a series of crackdowns on liberty.
"We were into art and cinema. Never politics." Pavlensky's partner, Oksana Shalygina, describes how he first moved into politics and the public eye, after he sewed up his mouth to protest the prosecution of Pussy Riot. "It was our mission to speak up and try to change the situation." Since this occasion, the two have fervently staged a series of daring stunts in defiance of the Russian regime.
Petr draws on parallels between his own form of protest and his country's history of dissent and revolution: "I want society to remember its social reflexes that it has somehow lost. After all, there was a revolution in Russia in 1917 ... then there was the coup in 1991; people were being active. Society needs this."
This powerful film follows Pavlensky through his arrest and release at the hands of Russia's regime. Through the lens of his work, we gain insight both to the increasingly totalitarian state of Russia and the brave men and women who dare to confront it.
FULL SYNOPSIS
TRANSCRIPT