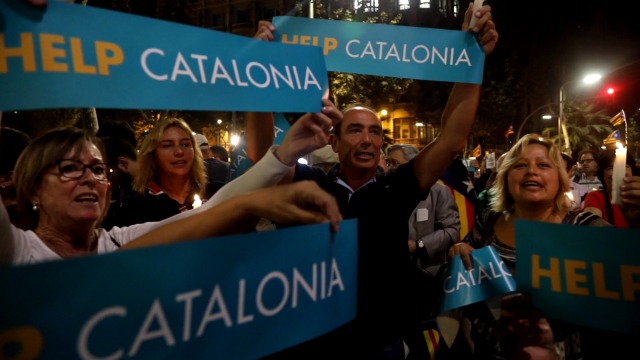 Spain is in the midst of its most serious political crisis in 40 years. As the Spanish cabinet roundly reject Catalonia's decade-long drive for independence, what is next for the divided region?

"As a Catalan, I feel very mistreated by the Spanish government", says tour guide Nuria Simon at an independence protest on the streets of Barcelona. "It’s nothing against the country. It’s nothing against our neighbours in Spain. It’s against Spanish government. We're taxed much more than the rest of Spain. There is no freedom of expression nowadays", she says. Comprising a sixth of Spain's population, Catalonia is the most popular of Spain's tourist destinations, generating nearly a fifth of the nation's income. But Barcelona claim that only 63 cents of every tax dollar levied by Madrid is reinvested in the region. "All we can do is try and show the world our will to be independent in the most peaceful possible way", says teacher Nuria Ontiveros. Yet her husband Santiago disagrees. "I think it's economical suicide", he says. Either way, Catalonia's peaceful resistance and independence polls have so far met total resistance from Madrid and the EU. For some Catalans, the situation recalls the legacy of fascism in the region. "Current attitudes of the Spanish government remind some Catalans of the Franco period", says Marc Calvet, advisor to Catalan's government.
FULL SYNOPSIS
TRANSCRIPT