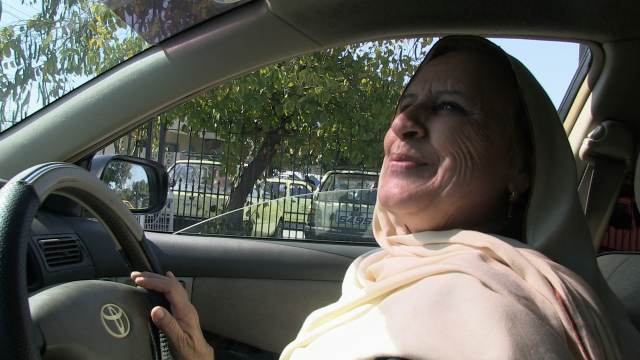 Pakistan's first female taxi driver meets systemic barriers round every bend. Hustling on the dusty roads of Rawalpindi, a portrait emerges of a working woman's persistence in modern day Pakistan.

"It's a sin to be a woman in Pakistan", says Zahida, a local legend of Pindi's streets. Twice widowed, 56-years-old and raising her sixth child, Zahida has blistered her hands working as a cabbie since 1992. "God gave me another daughter, now all my plans revolve around her", she says. After she lost her government job protesting dictator Zia-ul-Haq, Zahida found an opportunity for independence through Nawaz Sharif's taxi scheme. With her 7-year-old to support, she now searches for better paid work as a driver for an NGO. "But you know nothing works without contacts in Pakistan", she says, and despite some societal progression, it doesn't help to be a woman. Physically waning, Zahida recites poetry eulogising her late husband from behind the wheel. With grown up sons she never hears from, she locks horns with a host of men along the road. "My only wish now is that God give me enough life that I can make my daughter into a doctor."
FULL SYNOPSIS
TRANSCRIPT