Ukraine: The Female Fighters of Donbass 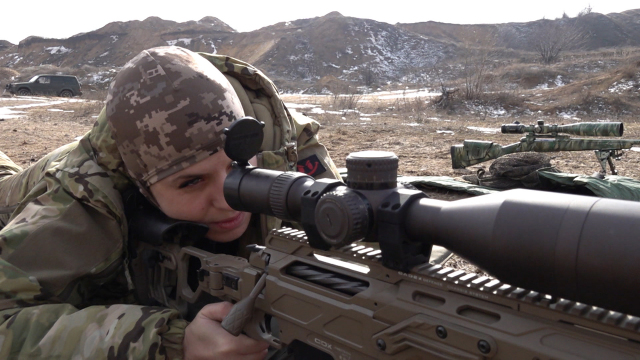 A forgotten conflict has been tearing apart eastern Ukraine since 2014. Now women represent nearly a quarter of the Ukrainian Armed Forces, but their involvement in the conflict is not always accepted.

Ukrainian sniper Yulia left her children behind to join the war on the country's icy fringes. "When our soldiers started dying, we couldn't just stand by. If you don't want to bury your own, then you need to bury others", she says. However, not all of her male comrades agree with her presence on the frontline. "For us, it's strange to see women involved in war. I understand feminism, equality and all that, but war isn't women's business", says her male commander Vasily, speaking from a bunker near enemy lines. Her involvement has also taken a toll on her relationship with her daughter. "She understands, but at the same time it hurts her because for the last four - almost five years I haven't been with them", says Yulia. Olga used to work at Donetsk International Airport, which was destroyed in the conflict. She now lives a stone's throw from the demarcation line. "We're scared to stay here, but we have no choice", she says, "we're hostages here." Whether taking up arms or raising a family, these women soldiers all share a common objective: to get back to normal life.
FULL SYNOPSIS
TRANSCRIPT