The Battle For Orgreave 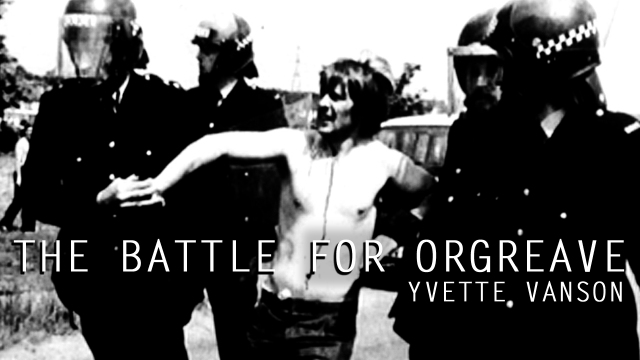 In this film we witness the violent struggle of miners trying to save their jobs in what became one of the biggest public disturbances this country has ever seen.

The camera focuses on the blood covered face of an angry protester, he looks defiant as he is led away by riot police. This is no criminal but a man trying to protect his livelihood. 55 miners faced long prison terms because of their involvement in the disturbance at Orgreave. This film looks at their fight for justice. Orgreave in the North of England was the focal point for a mass protest by miners in June 1984. At this time miners were angry over proposed pit closures and reacted by striking and pressurising other pits to close. The culmination of these protests was a mass gathering of miners from all over the country at Orgreave. On the morning of 18th June miners were escorted into Orgreave. At this point police tactics already resembled a military campaign. After a push by the miners the police acted with force charging the pickets on horses. The protest soon turned violent with the police using heavy-handed tactics such as dogs and batons in an attempt to suppress the riot. In this film we interview defendants about their experiences of being at Orgreave and the tactics used by police. During a court inquest into the miners' strikes a senior police officer stated: "I wouldn't have been worried in the slightest if people got trampled - I could not be held responsible if the miners were silly enough to stay there". Michael Mansfield defending barrister tells us: "There were serious acts of violence by senior and junior police officers". The film shows police charging protesters and committing unnecessary acts of brutality. At trial the miners were faced with life sentences if found guilty of criminal offences. Luckily justice prevailed and all defendants were released. Produced by Yvette Vanson
FULL SYNOPSIS
TRANSCRIPT