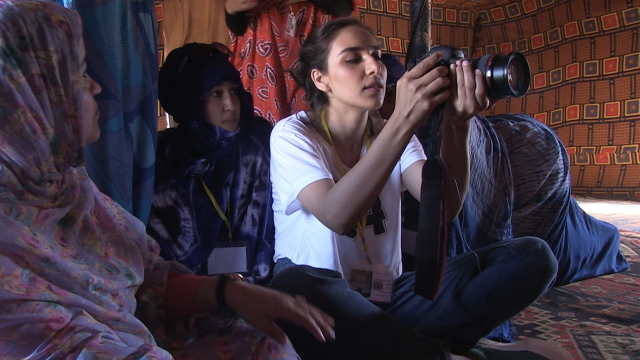 In 1975 many Sahrawi fled the Moroccan colonisation of Western Sahara to live in Algerian refugee camps, where they remain today. Here, a young Palestinian woman teaches a class of female Sahrawi refugees how to film.

"Movies are weapons, that's why we should fight our case with them", says Palestinian filmmaker Reham Ghazali. The 26-year-old has been invited to Algeria's refugee camp to give a workshop on filmmaking for the Sahrawi women, whose homeland of Western Sahara is under Moroccan occupation. Whether dealing with a dying camera battery, shy interviewee or non-existent camera phone storage, Ghazali and her female pupils are undeterred in creating their first short film on Sahrawi Henna. "Show your culture and tradition to immortalise your land", says Ghazali, in a tribute to the power of political filmmaking.
FULL SYNOPSIS
TRANSCRIPT