Join Sir Edmund Hillary and his friends on this epic adventure 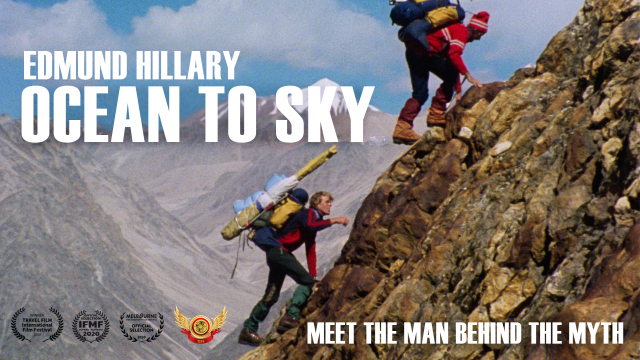 In 1953, Edmund Hillary and Tenzing Norgay summited Mt Everest – the first to do so. That same year, back in Hillary’s home land of New Zealand, the jetboat was invented. With this new invention, Hillary, conqueror of the Himalayas' greatest mountain, strove to also become the first to climb the Himalayas' greatest river, the Ganges. Braving boiling rapids and snowy heights, Hillary's perilous 2500km journey from ocean to sky was regarded as a pilgrimage by the people of India, who lined the river in their thousands to glimpse his ‘miraculous’ boats. But while battling the elements, Hillary was also battling depression following the tragic death of his wife and youngest daughter. Buckle in for a wild ride - a story of loss and healing, of laughter and deep friendships, and above all, heart stopping adventure.

Reviews and More
'I’m truly lost for superlatives… Moving, inspiring, brilliant! I laughed and cried and everything in between.' - Nigel Watson, Executive Director, Antarctic Heritage Trust
'A great story, beautifully told. The restored footage of the expedition looks sensational. The memories of the remaining members of crew were beautifully integrated into the film.' - James Acheson, Academy Award Winning Costume Designer
'A story of intrepid NZ explorers with Hamilton jet boats, and communities they interacted with along the Ganga. We loved the film.' - Helen Clark, Former Prime Minister of New Zealand
'Exciting, funny and deeply moving.' - Sara Hillary, Daughter of Sir Edmund Hillary

Michael is a pioneering adventure cinematographer whose
many award-winning films encompass the world's most
spectacular destinations from the Himalayas to the Andes,
Antarctica, the Arctic, the Pacific and Africa. In 1984 Michael
filmed Australia’s first ascent of Everest, unsupported, without
bottled oxygen and via White Limbo, an avalanche prone and
unrepeated North Face route. A couple of years later, he
conceived the idea and filmed Tim Macartney-Snape’s full
ascent of Everest from sea level. The resulting film, Everest:
Sea to Summit became the most internationally awarded
adventure documentary ever made.


Ocean to Sky 2019 is his seventh Hillary film. “He was a
humble man, with a great sense of humour. My own father
died not long before the expedition and Ed became like a
father figure to me. To have spent over two years in his
company, on expeditions and while he was actively building
schools for the Sherpas, has been the greatest privilege of my
life,” says Michael.

Mike is one of Australia’s most experienced and awarded documentary makers, with dozens of international documentaries to his credit. He has produced, directed, edited, shot and written Natural History, Adventure, Cultural and Environmental Documentaries for Australian and International Broadcasters, including many for The Discovery Channel and National Geographic. Mike Balson has won Australian Film Institute Awards and American Cinema Editors Awards for Directing, Editing and Soundtrack. He works through his production company, Entity Productions.

Paul is an Australian multi-instrumentalist, composer and choirmaster. He is known for his work with school children, assisting them to develop their compositions. He has written and performed film scores for two of Michael Dillon’s previous productions – A Little Bit Mongolian and Everest: The Boy Who Dared. Paul Jarman joined the Australian world music group, Sirocco in 1996. He works with other composers and choir leaders and promotes the inclusion of traditional music forms in compositions. His compositions for choir and orchestra have been performed around the world in venues such as the White House and at the opening of the World Rugby and at the London Olympics. Paul has performed for audiences in over 35 countries.