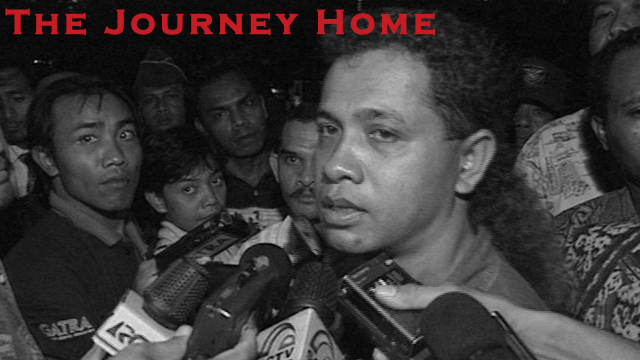 "Their bodies were dragged and burnt... One was shot, one was beheaded, and one was disembowelled", says the head of UNHCR in Atambua. The horrific nature of the attack has at last refocused the world's attention on the militias and the East Timorese refugees they still hold hostage. But while tension is mounting and observers predict another escalation in violence, the only ones to protect the refugees, namely the UN fieldworkers, have all but withdrawn completely, leaving the East Timorese more vulnerable than ever. It's just what the militia wanted. These people are now in the hands of the very militia whose acts of terror last year forced them to leave their families and homes. While many of them have been intimidated by pro-Jakarta thugs, some committed crimes themselves and fear reprisals from former neighbours when they go back. Julio Fernandas was one of the men who burnt down houses. He was an East Timorese member of the Indonesian Army, the TNI: "As a soldier who had long served my country and my people, I had commanding officers who gave me orders." Together with other soldiers and some militiamen Fernandas carried out a scorched earth operation, burning down around nine or ten houses. He was then ordered by his Indonesian commanders to move to West Timor. It was supposed to be a Temporary stay. But eleven months later, he knows that was a lie. Regretful of his actions during last year's bloodbath, Fernandas decided he would risk his life to return to East Timor. When he told the army, he was immediately discharged and threatened by the militia. While officially the refugees are allowed to return, various tactics are employed to dissuade them from doing so. It has been hard for them to find out what it's like back in East Timor. And the militia have been spreading rumours that there was a famine, that women are being raped and that men are being killed. One of the refugees, known as "Joaquim", believes that the militia have been running a disinformation campaign to keep the East Timorese in fear. But after a year of living in a camp with 12,000 other refugees, Joaquim and his family have decided to return, whatever the risks. The hardship in the camp and the shortage of food has worsened since the UN left and people have been starving. "We're human beings. We're not trees or stones. We've been here a year and we don't have anything... Whether we live or die, we want to go home". Produced by ABC Australia
FULL SYNOPSIS
TRANSCRIPT