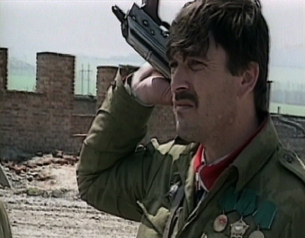 This excellent collection of rushes from video journalist Max Stahl illustrates the KGB's attempts to isolate and undermine Dudayev's fledgling Chechen republic. Despite this being a period of relative calm in Chechnya's history, this footage demonstrates how the KGB attempted to create conflict inside Chechnya by spreading disinformation internally and externally, by organising rebellions of allies and potential dissident groups, by sewing terror through the use of criminal groups and by staging Chechen attacks (the latter of which were sold to the foreign media as attacks on Russian bases in Chechnya). This footage reveals the disciplined, restrained and sometimes comically naive response of the Chechen state and government to an almost non-existent Islamic threat.
FULL SYNOPSIS
TRANSCRIPT