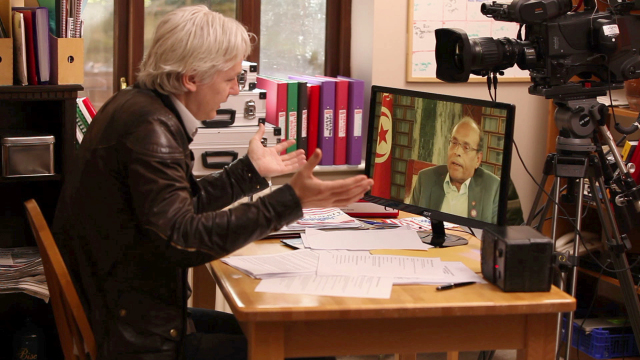 During the course of the Arab Spring, the Middle East was shaken by a series of revolutionary movements that began in Tunisia. In this episode, Assange speaks to Tunisian President Moncef Marzouki on a variety of topics.

The debate is wide ranging, including their shared personal experiences of prison, the human rights record of the US, democratic Islamism, torture and secret files. But, despite their obvious mutual respect, Assange is able to challenge Marzouki, both over the censorship of the internet in Tunisia and on his position over the revolutions in Bahrain and Syria. According to the President, "we have to forget about the positions of Nasrallah and people like him. There is no good dictatorship. Dictatorship is dictatorship: corrupted, brutal and against the people."
Episode 1: Hassan Nasrallah Episode 2: Slavoj Zizek and David Horowitz Episode 3: President Moncef Marzouki Episode 4: Alaa Abdul El-Fattah and Nabeel Rajab Episode 5: Moazzam Begg and Asim Qureshi Episode 6: President Rafael Correa Episode 7: Occupy Wall Street Episode 8: Cypherpunks - Part 1 Episode 9: Cypherpunks - Part 2 Episode 10: Imran Khan Episode 11: Noam Chomsky and Tariq Ali Episode 12: Anwar Ibrahim
FULL SYNOPSIS