The extraordinary story of a young reporter in war-torn Kobanî. 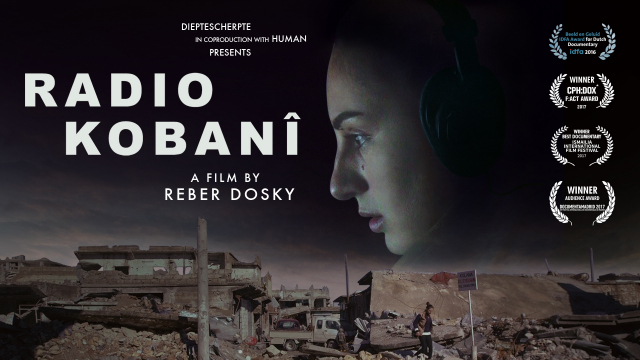 Out of the smoke and dust of battle came Radio Kobanî, the brainchild of 20-year-old Dilovan. A young Kurdish woman, Dilovan took it upon herself to document the final days of IS control, and the stories of refugees returning to their flattened homes. Despite her harrowing experiences, Dilovan’s positivity is resilient. Her belief is vindicated by the strength of Kobanî’s citizens and their capacity to collaborate in the face of destruction.

Reber Dosky (1975, Dohuk/Kurdistan) is a Kurdish-Dutch filmmaker. Living in The Netherlands since 1998, he studied film direction at the Netherlands Film Academy and completed his studies with The Call (2013), which traced the impact of war and displacement on the relation between a father and a son and won several awards on international film festivals. With The Sniper of Kobani (2015) Dosky achieved his international breakthrough, earning awards in Canada, Brazil, The Netherlands, Egypt, Italy, Japan and Mexico among others.

Dilovan, a 20 year old Kurdish woman, sets up a radio station in the devastated town of Kobanî, Syria, during the liberation fight against IS. Dilovan's programs, in which she interviews survivors, returning refugees, fighters and poets, bring a sense of belonging to the broken lives of the listeners who need to rebuild the city and their future. Dilovan tells her own story in a message to the child she may have one day. Shot over a period of three years during war and reconstruction in Kobanî, RADIO KOBANÎ is a bitter, intimate and poetic tale of trauma's, healing, hope and love.